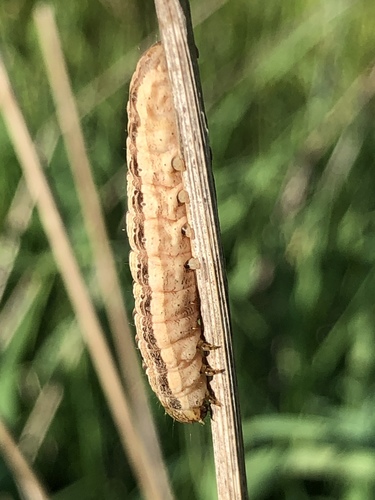 Biology and life history: Two armyworm species (Dargida diffusa and D. terrapictalis) are known to damage cereal crops sporadically in the Pacific Northwest. Their larvae and adults look similar, making it hard to identify them precisely in the field, but their damage and management requirements are similar. Their adults are yellowish brown with straw-colored forewings matching dry grasses or cereal crops. Depending on the plant they feed on, the color of larvae varies from gray, cream, or green with longitudinal white and brown lines down each side of the body. Pupae of wheat head armyworms overwinter in the soil. The adults emerge from pupae in spring and start to lay eggs on cereal crops (mainly wheat) or grasses. The larvae feed actively throughout the crop growing season and move to the soil to pupate.

Host plants and crop damage: Wheat head armyworms feed primarily on wheat and plant heads (hence the name), but also on other parts of host plants of other cereal crops and grasses. Although the larvae rest in soil at the base of the plant during the day, they feed on cereal heads during the night. Like many other caterpillar larvae, they hang onto the seed head upside down, insert their mouthparts into the base of the floret, and damage developing grains (kernels) hollowing them out. The damage is similar to that caused stored grain pests such as weevils.

Management: Since these pests are not serious pests in the Pacific Northwest region, there are no integrated pest management guidelines and economic thresholds developed for them. However, regular field scouting, sampling, and trapping around field margins and interiors of crop fields is recommended if infestations have occurred previously in any area. Sampling can be done by sweep netting while trapping is done using sex-attractant pheromone traps. Natural enemies such as ground beetles, spiders, birds, rodents, parasitic wasps manage populations of wheat head armyworms. Insecticides are not developed or generally not recommended for these pests. If needed, certain pyrethroids might control them, but these pesticides can also affect their natural enemies.