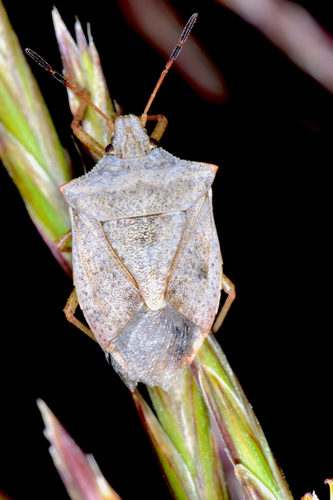 Biology and life history: Although the invasive brown marmorated stink bug (Halyomorpha halys) is now the most notorious stink bug in the US, there are several stink bug species that are pests of crops, weeds, and wild plants. These stink bugs are medium to large sized (0.38 to 0.5 inch long) insects that release foul smelling chemicals (hence called stink bugs) to avoid predators or communicate. They are green to grey or brown in color and their bodies are covered by shield-shape structure. Stink bugs have one generation per year. The adult stages of many stink bugs overwinter in wooded areas, bordering grasses, or cultivated crops. They begin to emerge in spring, mate, and the offspring are developed during the summer.

Host plants and crop damage: The adults emerge in spring-early summer and feed on crops such as wheat, causing damage particularly when the heads are at milk or soft dough stage. But some species also attack leaves. They have piercing sucking mouthparts and feed by injecting salivary enzymes that digest the plant tissue, sucking plant sap from damaged tissues. Unless they are in high numbers, stink bugs do not reduce wheat yield noticeably.

Management: No economic thresholds have been established for stink bugs in the Pacific Northwest. Growers are encouraged to scout or sample their crop fields frequently after planting, particularly more when wheat starts heading. Stink bugs infestation are generally concentrated near field edges or in crop fields that are close to rangelands or other grassy areas. In areas with high stink bug populations, cultural controls such as early planting and crop rotation are helpful in managing this pest. Eliminating plant cover that can harbor the bugs near crop field also helps reduce the stink bug overwintering and movement to crop fields and plant damage.