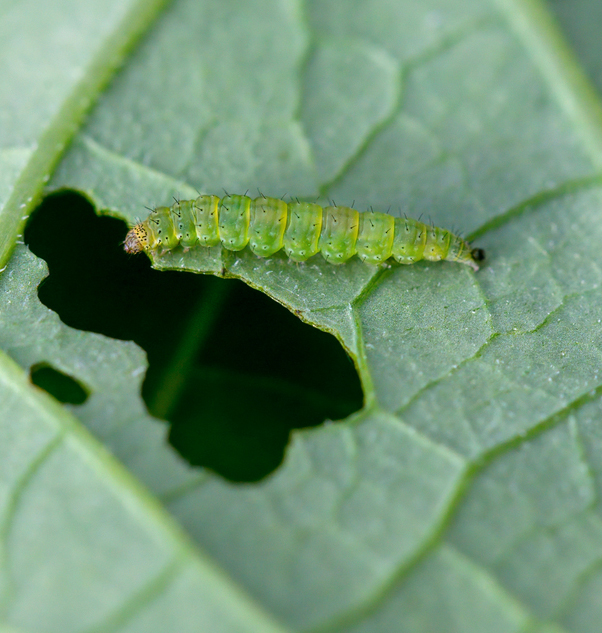 Biology and life history: Adults are small (1/5-1/4 in), slender moths with dark to light brown wings and light brown band along the back. Wings of males are more strongly patterned than those of females, with cream-colored lines forming 1-3 diamond shapes when viewed from above. Adults overwinter in protected sites or reinvade from warmer latitudes annually. In the inland Pacific Northwest, adults emerge in May or June. Females lay yellowish, flattened oval eggs singly or in clusters of two to three, placed on leaves. Small, green larvae hatch after four to eight days and begin feeding as leaf miners, transitioning to pit and windowing feeding as they mature. Mature larvae spin loose-mesh silky cocoons on the plant and pupate within them. After 10 days to two weeks, adults emerge. There are two to four overlapping generations per year in the Northwest and warmer climates may see a dozen or more generations.

Host plants and crop damage: Larvae feed exclusively on plants in the mustard family and attack virtually every crop in this group, including canola and cole crops. Adults do not feed on or damage crops. Larvae can feed on any green tissue but prefer leaves. The feeding leaves irregular holes or windows where the green tissue has been eaten and the clear cuticle remains. Extensive feeding on leaves may delay maturation. Additionally, when leaves are starting to wilt, larvae may move to stems and pods, sometimes leading to extreme yield loss.

Management: Natural enemies are important for control and include several species of parasitoid wasps. The most important parasitic wasp species, Diadegma insulare, requires nectar to survive and can be attracted by planting of flowering plants such as alyssum. Synthetic insecticides are effective, but the moth is notorious for its ability to develop insecticide resistance. Bacillus thuringiensis (BT) var. kurstaki toxin formulations are effective and preserve natural enemies better than synthetic insecticides.