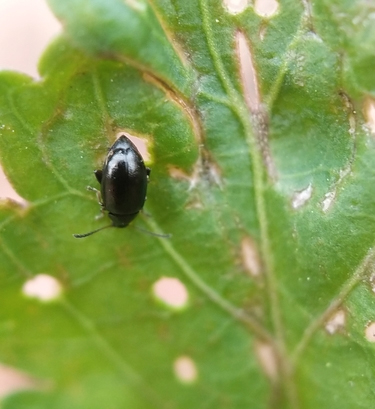 Biology and life history: The crucifer flea beetle and striped flea beetle (P. striolata) are the most serious pests of cruciferous crops, with the former being more abundant than the later in most of North America. The adult is small (0.1 inch) and oval-shaped with shiny metallic blue-black elytra (wing covers), while the striped flea beetle is black with two wavy yellow stripes (hence the name) on their elytra. Both species are good fliers. Using their enlarged hind legs, they can also jump (like fleas) great distances. It has a single generation a year and overwinters as an adult under leaf litter, mulches, or stubble. The adult emerges when temperatures warm up in spring and start feeding on newly emerged canola, weeds, or other available cruciferous crops. During summer, the adult deposits eggs in the soil. Larvae feeds on roots of host plants and pupate. Adults emerge late summer, feeding on foliage in late summer and fall before overwintering.