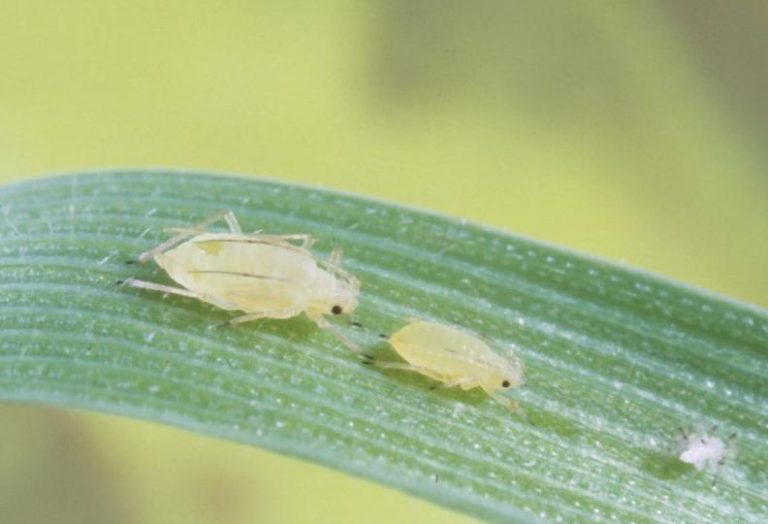 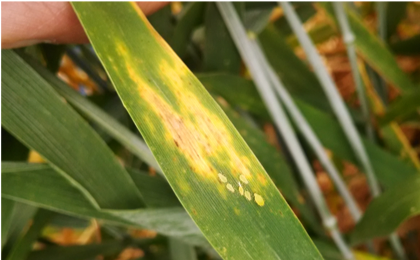 A small colony of cereal grass aphid showing the typical injury it cases to wheat (photo by B. Palmer, McGregor Corp. taken near Colfax, Washington, June 2015).

Biology and life history: Cereal grass aphid is a newly invasive pest first detected in 2011 in the Pacific Northwest, USA. In its invasive range, it mainly colonizes cultivated small grains. Wingless forms of cereal grass aphids are shiny, yellowish, or pale green, and their winged forms have dark bands across the abdomen. This aphid can also be identified by the distinctive damage it causes on cereal leaves (see image). Like most other aphids, its females give birth to live young on wild and cultivated grasses year around in both native and invasive ranges.

Host plants and crop damage: Since its first detection in the Pacific Northwest region, cereal grass aphid has expanded its range and become one of the most abundant aphid species on wheat. In addition, it colonizes barley, meadow foxtail, blue wildrye, perennial bunchgrass, and blue bunch wheatgrass, but has not been recorded on corn and sorghum. Its feeding on hosts produces distinct injury characterized by red pigmented spots fusing into chlorotic and necrotic patches on leaves. Cereal grass aphid frequently co-occurs in wheat systems with the visually similar rose-grass aphid, which does not produce the pigmented chlorotic and necrotic patches on leaves. Previous study shows that cereal grass aphid can cause serious damage to crop by direct feeding and may also transmit plant virus.

Management: Growers need to vigilantly scout their cereal crop fields during bolting to detect this aphid. Any colorful necrotic injury present in cereal crops can suggest cereal grass aphid presence. Because of its new arrival to North America and limited studies done so far on its crop injury in the field, there are no formal recommendations for its management. Until those are developed, growers can use the management threshold for Russian wheat aphid, whose phenology, occurrence, and injury level are similar to cereal grass aphid. Other than generalist predators such as lady beetle and lacewing larvae and adults, and some parasitoids that also attack other cereal aphids in the PNW, little is known about specialized natural enemies of this aphid and their potential to suppress its populations.