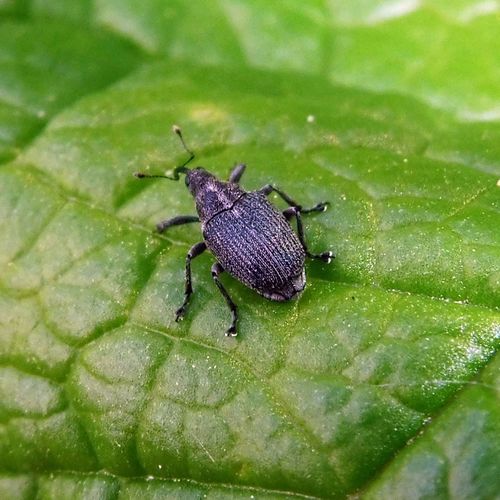 Biology and life history: Adult cabbage seedpod weevils are small (1/12 to 1/6 in), grey and have extended mouthpart (a curved snout). Adults overwinter in protected sites. In spring they feed on early growing wild mustard family plants, moving to canola near flowering time. Females usually lay only a single very small, creamy white egg per pod. White and grublike larvae hatch after six to eight days and begin development in the seed pod. Larvae develop feeding on seeds, boring a hole to exit the pod to drop onto the soil where they burrow to pupate. Adults emerge about 14 days later and feed on any remaining crop before moving away from the field to other habitats where they overwinter in diapause. There is one generation per year.

Host plants and crop damage: Adults and larvae feed on more than a dozen plants in the mustard family, including canola, cole crops, and various species of wild mustard but only plants with large seedpods can support larvae. Adults may feed directly on flower buds, causing bud blasting, as well as pods. Larvae burrow into the pod and feed on developing seed, consuming five or six seeds. This feeding damage makes the pod appear misshapen and may cause premature shattering. Damaged pods have a grayish, mottled appearance with visible small oviposition holes and larval emergence holes. Within the attacked pods, seeds are wholly or partly consumed and frass from the larvae is visible. Cabbage seedpod weevil injury can promote secondary attack by pathogens (e.g., Alternaria leaf spot) and other insects.

Management: Only a limited group of natural enemies is known to attack cabbage seedpod weevil. The larvae are attacked by parasitic wasps that oviposit into the pods. There are several such species in Europe and at least one has been released in North America to help suppress the pest. Also, pupae can be consumed in the soil by ground beetles. Management is mostly through foliar pesticide applications, but the currently registered materials should be applied based on scouting for the ovipositing females, typically using sweep netting. In Idaho, 3-6 adults per sweep can cause economic damage. Tolerance to cabbage seedpod weevil feeding is considerable since the plants can compensate to some degree by producing more pods. Seed treatment insecticides (neonicotinoids) can also be used against larvae. Trap cropping with early-flowering field mustard (Brassica rapa) followed by insecticide application is also a proven management method.