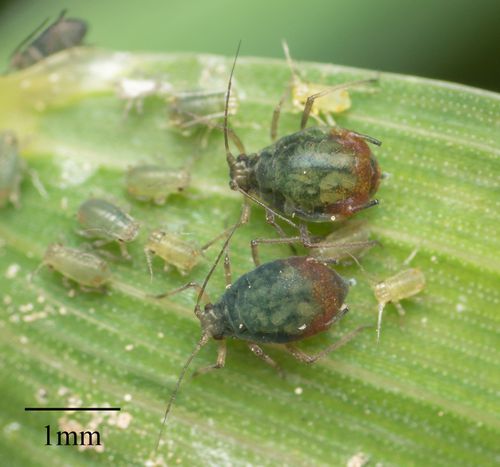 Biology and life history: Bird cherry-oat aphid feeds on many grass species including cultivated small grains. It is native to Europe with a worldwide distribution. It is holocyclic (i.e., having an annual sexual phase) overwintering as eggs on bird cherry or other Prunus spp. where they feed in the spring before moving to grassy hosts in summer. Where Prunus spp. are rare, as in much of the Pacific Northwest, populations of bird cherry-oat aphid can become anholocyclic (no sexual phase; permanently parthenogenetic), feeding on grasses year-round. The aphids are pale green to dark green, brown or nearly black, sometimes with reddish patches on their backs. This appearance is very distinctive among cereal aphids, so the species is easy to identify. Both winged and nonwinged forms occur.

Host plants and crop damage: Like all aphids, bird cherry-oat aphid feeds by inserting its stylets into phloem tissue and removes the sap. Typically, infestations are found on the lower third of the plant. Sufficiently large populations can damage the crop by this feeding, reducing crop biomass and yield. It is the principal vector of Barley yellow dwarf virus (BYDV), which attacks many economically important field crops. This makes it particularly problematic in years when the virus is prevalent.

Management: The aphid is attacked by several predatory insects, parasitic wasps, and entomopathogenic fungi. These natural enemies can keep populations in check. There are not formal economic thresholds, but 5 to 10 per stem before flowering is a rough guideline for the Pacific Northwest. If BYDV is present or suspected and during the first 3 weeks after crop emergence, even very low infestations should be treated to prevent virus spread. This can occur in spring sown small grains and in fall sown small grains before the onset of winter. However, BYDV is primarily an issue in fall sown small grains in the PNW.